In this education piece, you will learn about the following:

To enable professional LGV drivers to recognise the importance of speed limits, to keep up to date with changes to limits and the outcomes of using excessive speed.

By the end of this topic the drivers will be able to describe why speed limits are in place, the risks of speeding, identify speed limits and the consequences of not adhering to speed limits.

What vehicles are required to have a speed limiter fitted?

In 2015 two speed limit changes came into force which affect vehicles over 7500kg, but what are they?

Revised regulations in England and Wales increased the limit for vehicles over 7500kg. 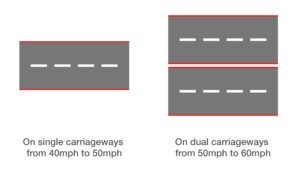 Although unpopular with many road safety charities, the speed limit increase was defended as being necessary to keep limits relevant to the modern transport network and improved vehicle technology.

It has also been suggested that it will hopefully curb the number of hasty and dangerous passing manoeuvres pulled off by impatient car drivers.

There have also been changes to speed limits in England during 2020. Do you know what the changes were?

In July 2020, Highways England announced that following extensive research and trials, vehicles can be driven at up to 60mph where it is safe for road users and roadworkers, and where shown on road signs.

This is 10mph faster than the previously enforced 50mph limit.

The reality is that it isn’t, as it is becoming increasingly related to environmental reasons too.

In September 2020 it was announced that as part of a 12 month trial, laws are being introduced where speed limits will be reduced across four key sections of motorway to cut down pollution levels.

The four sections are:

Why would a professional driver be tempted to speed?

The risk factor in an LGV is significant:

When you think about speeding, what type of road do you see in your mind’s eye?

Depending on the situation, the fines and penalties that can be imposed on drivers caught speeding tend to vary.

Professional drivers can often be subject to heavier fines or penalties because of the perceived level of risk while driving an LGV.

In April 2017, the sentencing guidelines for if you are found guilty in court of speeding changed. Do you know what the changes were? 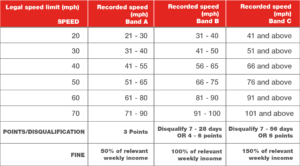 View all posts by Carl Hughes →